Is Your Burnout the Result of Unconscious Guilt?

From social workers to medical nurses, nobody dedicates their career to helping people without a reason. OK, there are some charlatans who exploit people, like everywhere; there are some people who just hope for a safe job or status, but maybe even then there are some hidden reasons why they were attracted to such a profession. Still, let’s stay with those helping professionals who don’t focus on money, who might be aware that they’d never be rich or promoted, who don’t bait people with glamour and promises of magic, who care to make a positive change in the lives of others.

Such people usually choose their profession based on what they can identify with more easily and what is more familiar and personally important. Some of them might be naturally more empathetic than average, but many find helping important because they have already experienced the need for help, either in their own experience, or through somebody close to them. Such helpers are the most likely to suffer burnout.

Burnout is a syndrome of lack of energy, motivation and sense of meaning in context of one’s job, as a result of long term stress, losing ideals and hope. It often seeps into personal life through anxiety and depression. At the surface, this can appear a result of external stress and disappointment, but often there are deeper causes underneath. 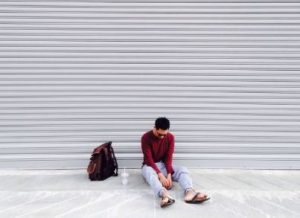 Exaggerated sense of responsibility from childhood

If children face illness, violence, addiction or some other type of chronic instability in their close environment, they will usually feel the need to help. They might even feel it’s their responsibility to help, even if nobody asks them to (and some parents do ask children for help, unhealthy as it is). A small child doesn’t have enough experience to be able to estimate how (un)realistic that is. At the same time, children naturally perceive themselves as the center of everything that is going on around them. Thus even if they don’t see themselves as contributing or causing the problem (which small children often do), they might perceive themselves as responsible for providing solutions, or at least some relief.

Of course, children are usually not the real cause of the family problems, neither do they have resources and experiences needed to provide significant help. Yet no matter how unrealistic it might be, children would see themselves as a part of the problem and would try to change something. Some children might get actively involved (for example, in some cases of domestic violence children try to verbally of physically protect an abused parent), and some children will simply try to be as good as they can, hoping that somehow that would reach through to the important people.

As the cause of the problem is usually unrelated to the child, the situation is not likely to get any better, and might with time get worse. The younger and more sensitive children are, the more likely they’d blame themselves for their lack of success. This doesn’t happen on the level of rational thinking (which might not even be developed yet), but in much more instinctive, emotional parts of the brain. Such children might spend a lot of time feeling stress, anxiety or emotional paralysis, on one hand believing they should be able to influence something, and on the other hand feeling that no matter how much they try, it’s not enough.

The latter is a common problem from which many people suffer, but they don’t all chose helping professions. Some might try to solve such unresolved feelings by falling in love with persons with problems, whom they might try to save and help, in an unconscious hope that this time they’d be able to fulfill others’ needs and their own expectations of themselves. This often ends up with the helper becoming the victim and starting the whole cycle anew. But that’s another story.

Feeling responsible for the whole world

If such people decide to become helping professionals, they will easily project their childhood need to help and their attachment to achieving desired results to many cases they face in their job. Then lack of success or less than expected success can trigger unresolved childhood issues of feeling inadequate, unrealistic responsibility, and guilt. Such people might spend their free time pondering the mistakes they might have made, all the things they could have done differently, the moments in which they could have used a better word or invested a bit more effort… forgetting all the mitigating circumstances, as well as the responsibility of other people.

A client I will call Adriana is a helping professional. Her parents used to fight a lot when she was a child, and sometimes fights would escalate into physical violence. Adriana felt stress and guilt, she tried to be good and cooperative, but would achieve nothing. Besides, her mother also carried guilt and sense of inadequacy from her own childhood, which Adriana modeled through the normal process of learning through identifying with the parent of the same gender. Both parents were also very critical to Adriana, while, as is often the case, taking her qualities and good results for granted.

When Adriana feels criticized at her job, or faces lack of success, the old feelings of inadequacy and guilt come out. She questions her behavior in detail, wondering what she could have done differently, even if rationally aware it wouldn’t have changed much. The stress and inner conflict this creates often drain her of energy so, especially when she comes home, she feels tired and unmotivated. Of course, this influences her relationship with her family and ability to do house chores (which she again feels she should be able to do well). Then she feels even more guilty and inadequate.

Not only that, but Adriana feels she should help others even more. She already donates to charities, but perhaps she should donate even more. Whenever a catastrophe happens somewhere in the world, she feels she should help at least a little. Sometimes she feels guilty when she allows herself to enjoy leisure time, because there are so many people suffering in the world, and maybe she could give a bit more of her time to them. She’s aware that such extra efforts would be like a drop in the ocean, but each drop still means something. Maybe dismissing the influence of her efforts is just a way to avoid responsibility? There were people in history who achieved incredible results through their courage and hard work, in spite of seemingly insurmountable obstacles. There are people who risked their safety, or even their lives, for the change they wanted, and they are to thank for what we have today. When enough people come together, they can bring change – maybe Adriana should be braver, louder, gather other people around her? But she lacks energy and enthusiasm, and then she wonders if it’s just selfishness.

For a small child, the family is the whole world. It’s difficult to even be aware of something going on outside it. So, just as adult people can expect the rest of the world to treat them like their families treated them, they can also project their feeling of responsibility towards their families onto the whole world.

How to find balance?

Adriana is, of course, correct when she says social responsibility is important and that even a drop in the ocean means something. If most people thought their contribution wouldn’t matter, or that somebody else should take responsibility, nothing would ever change – and that’s exactly how things often go. Yet, Adriana takes a disproportionate, exaggerated part of that responsibility upon herself; not enough to endanger her safety and life, but enough to damage the quality of her life, and perhaps health, too. It can be more difficult to recognize a feeling as childish when there are rational arguments supporting it. And then we can go over the top.

Adriana felt great relief as soon as we managed to find and reach the lost, frightened little girl inside her, which on some level was still listening to her parents fighting. Understanding where her burden comes from and why she couldn’t resolve it as a child already gave her a much better perspective. Additional work on healing her relationship with parents helped her feel good in her own skin and appreciate the value of her efforts. She’ll probably always desire to help people – there’s nothing wrong with it – but if she can support the little girl within, she can find balance – recognize when she had enough and value the quality of her own life without feeling guilty.

Many people are surprised to find out how many emotions can reflect childhood experience and conditioning, even when those emotions seem to be caused by external circumstances. In particular, feelings of guilt, helplessness or inadequacy often originate in childhood and are often in the root of adult depression. It’s worth finding out where they come from.

Intimacy With Your Own Feelings